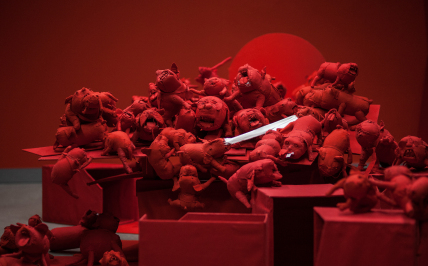 youth adults seniors
An exhibition of works by Polish sculptor and educator Jan Kucz.
Jan Kucz was born in 1936 in Zarzecze in Cieszyn district, in a village that no longer exists. A few decades ago, an artificial lake was formed there, a water reservoir for the cities and developing coalmines of Silesia. The bottom of the lake now hides the history of many people, the preyed land, the oasis. There were two brick churches there, a school, a tavern and a cemetery. The fire station attracted rich cultural life – there was a brass band, a housewives club and local folk bands. Inhabitants of Zarzecze had their own dialect, influenced by the Żywiec highland culture. They used it every day.
In a short time they all had to leave the village. Hundreds of trucks – Russian ZIŁ’s – running over paths and roads, taking all their possessions. Uprooted and adapted to new places, they had to start everything anew, with new neighbors and the new concern about the future. The echoes of the recent war and the barbarian policy of the communist government remained in the minds of the next generations. Janek would recall that when the reservoir was drained for necessary repairs, people from the village would come to touch their patrimony. He would also come and treaded, barefoot, the bottom of the lake, the land of his childhood. He saw blurred outlines of the houses, the fire station and the church. They marked the map of his beloved village. People would put flowers in these places. Then, when the water flooded the valley again, those floating flowers were indicators for them, points in their memory.
I am writing about it because I find traces of those events in almost every gesture and every work of professor Kucz. He talked about home and he taught us how valuable the place of birth is and how much it matters, especially to those who romance with art. Memory cannot be deceived, and the source of conscience has its beginning and continuation in one’s own history. The true one.

A boy from Zarzecze came to the Academy of Fine Arts in Warsaw with the courage to speak openly who he is and where he is going. His attitude made those who were ashamed of their birthplace feel uneasy. He studied sculpture. He developed constantly because he thought it was a duty of those who take life seriously. In the studio he would repeat that you must learn how to study when you are at the academy so that later on you can continue studying on your own. This is a life lesson. Many of his students, artists, friends or even enemies follow his tips. One of the first sculptures created by Kucz, with expressive and moving poetics is Head with Golden Tooth. It is a parable of greed, multiplying material values, and at the same time of void and disillusion. It seems that the sculpture is dedicated to those who fins the sense in life in what is here and now, and never consider what the future will bring. We do not look behind, because why should we? Kucz awakens and activates our conscience with this sculpture.
Professor treated his students seriously. He would patiently observe how the situation developed in his classes, he encouraged students to use courage dictated by imagination. A stone needs to be broken into pieces and put together anew. We need to understand the process of destruction and construction. His justified comments were part of every correction. He wrote: “The process of creating a work of art is a state of permanent staying on the border between intuition and sub-conscience and intellectual analysis and deduction. This is vigil in order not to yield accidentally to one of these two extremes”.
Jan Kucz’s father was a tailor. The best one in the village. A tailor who “conjured up figures”. He was valued because he impressed people with his professionalism. Wearing the clothes made by him people felt better, more beautiful and noble. Young Janek observed his father at work. He also helped. He saw the birth of constructions, harmony, forms and proportions. Everything fitted. This world returned to him after many years, intensified, turned into poetry, in the space of Jan Kucz’s art. He owed to his father the life material, literally close to man and philosophy. He talked about it with excitement and esteem. I remember when in the parish church in Orońsko, during the national exhibition of sculptures, Kucz showed Holy Mother of the Poor – a fabric sewn from potato bags, as big as the altar. His courage to speak about the sacrum in the simplest way, without any glitter, flattery or ceremony, made great impression on us. The exhibition was attended by local residents. “Look at suntanned and unshaven necks of the peasants and white starched collars” – Kucz told me. Here is the truth. Today Holy Mother of the Poor can be seen at Jasna Góra.

An extraordinary, or even mystic event was for Kucz the creation of Stefan Wyszyński’s monument in Częstochowa. The monument was born in the atmosphere determined by the arist’s illness and imminent, serious operation. Professor took this task very personally and spiritually. The cardinal was to kneel with the faithful ones directly on the ground in Jasna Góra. He was to belong to pilgrims who came from all over Poland. A monument without the base. This is what cardinal Wyszyński was like and this is how Jan Kucz saw him in this project. Do not look at me, at my robe, look at how I kneel down and
I bend my head in humbleness – this is the message of the sculpture. The figure of the primate preying recalls this dignitary of the Church ntotally devoted to people and God. Focused on the tower in Jasna Góra, he indicates the place – the center of dialogue. This is one of the most outstanding monuments in Poland. It does not emanate superiority nor does it manifest greatness. It is a picture of a man of faith and humbleness. The monuments created by Kucz are his reaction to man. They do not trick us with form or content. They are sculpted wisely – bearing in mind both the idea and its recipients. They originate from world-class artistry.
Kucz had the courage to oppose general tendencies to beautify and idealize the figure of a social hero. His other monument in Częstochowa, showing a stumbling old man, bent with his illness, carrying the weight of suffering, totally true, is John Paul II, the embodiment of dignity and humbleness.