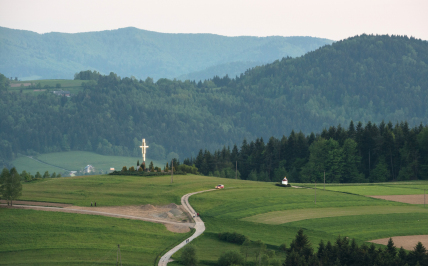 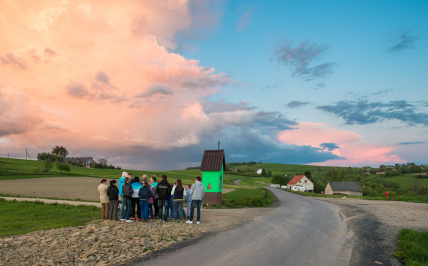 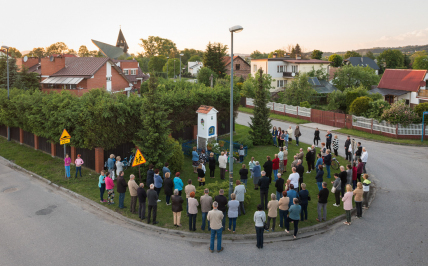 Tickets: free ticket
Additional information:
Gallery opening hours:
Monday - Sunday 11.00 - 20.00
youth adults seniors
Axis mundi: roadside shrines & crosses is a long term documentary project by Krzysztof Ligęza that has been taken since 2012.
Author's photographic activity is focused in the project on recording the local communities in the Małopolska (Lesser Poland) region in the context of the disappearing custom of prayers at roadside chapel-shrines and crosses, which are one of the most typical elements of the Polish cultural landscape [...]. The project is not a catalogue of the shrines. The essence of the series is a reflection on the relation: man-nature-sacrum. The space (landscape) is important here as a factor shaping spiritual experiences and community bonds.

The tradition of prayers at the small religious architecture has its source both in the Christianity and pre-Christian beliefs. Due to the custom’s provenance, the space plays an important role. The visual analysis includes topography, environment, nature of the premises, the appearance and behaviour of the faithful, as well as aspects related to perception of time in its anthropological dimension: cyclicity and linearity. The varied topography and the surrounding of chapels and crosses brings to mind the idea of the world centre – axis mundi, popularised by the famous religious scholar, Mircea Eliade. In his reflection on the essence of religion, he drew attention to the manifold forms of the manifestation of sacred, analysing it in a broad anthropological context (archetypes, myths and symbols) [...].

What the “centre of the world” is? This is the sphere where the chaos transforms into cosmos – ordered reality. The sphere of extraordinary communication, where the heavens connects with the earth, the material dimension permeates itself with the spiritual, the local with the universal and the temporal with eternity. Symbolic “centres of the world” reveal its sanctity and at the same time serve to restore eternal values. Eliade repeatedly emphasized that the human longing for the “fullness of being” is related to the space of a sacred dimension. This longing has been evident in many cultures and religions always. The most complete expression of this is found in the archetype of paradise: the mythical centre, the place of the unity of all creatures, primal in its harmony, the holy and marked by God’s presence. Traces of the “longing for paradise” topos can be found already in the beliefs of people from the Mesolithic age (8,000 years BC). Also, Christianity is filled with nostalgia for the lost paradise. Its’ gates are reopened again by Christ himself through death on the cross, which became the tree of life.

The opening of the exhibition: Axis mundi: roadside shrines & crosses